We are pleased to announce another update for the PlusPortals. While this is a minor update, a number of important enhancements and feature fixes are included:

The PlusPortals were updated during the early morning (EDT) on December 20, 2016. Please review the full details of this update below.

The E-Mail Inbox, Drafts, and Sent Items Screens Will Now Load Faster for Users with a Large Number of E-Mails

Users rarely need to see e-mails from earlier than the past 30 days. Therefore, a default filter has been applied to these screens, showing only e-mails from within the last 30 days each time the screen loads.

This default filter can be seen and edited by clicking the Filter icon in the Created Date column. In order to see e-mails from before the past 30 days, edit or clear the filter, or click the Clear Search button to clear the default filter. 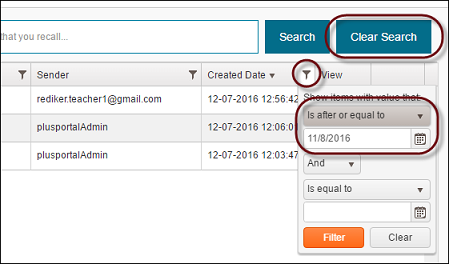 The Recipient Lists for the To:, Cc:, and Bcc: Fields Will Now Be Saved with E-Mail Drafts

When creating an e-mail and saving the e-mail as a draft to be sent at a later time, recipients added to the e-mail will be saved with the draft (as illustrated in the image below). The e-mail can be edited and sent later from the Drafts folder by clicking the Pencil on Paper icon.

Rediker Software strives to bring you programs with the best feature sets and user experience on the market. To this effect, we are pleased to announce an upcoming update to the PlusPortals, scheduled for early January. This update will be focused on significant improvements to the loading speeds of several areas and processes of the PlusPortals. The PlusPortals team has been hard at work on this effort since October, and we are nearly finished with enhancements for the following areas and processes:

While the above improvements should have a significant positive impact on your users’ day-to-day experiences, this is only the initial phase of our work to enhance loading speeds in the PlusPortals. From this point forward, additional loading speed enhancements to other areas and processes will be included in most updates to the PlusPortals.

If you have any questions related to this update, please e-mail portalsupport@rediker.com or call Tech Support at 800-882-2994