We added an Enrollment Form type.

An Enrollment Form differs from a Generic Form in that an Enrollment Form is not published and sent to every parent account.  This form is set up to only be added to select prospects.  You can access the interface to add prospects to the form under Send Form

Only prospects with an Online Forms account can be added to a form.  If you have manually entered a prospect to AdmissionsPlus and want to send an Enrollment Form to them, you need to create an account for them under Accounts in the Online Forms Manager.

Click Preview in the upper-right corner of the Form Builder to open the form in a new tab, displayed as a parent would see it.

Previously, forms contained an Attachment section. Each required item added there appeared in the Requirements to be Completed section for the prospect in their parent’s account.

Now, Attachment is a form type.  When you select the Attachment type for a form, a simple file upload interface item appears under Requirements to be Completed.  You can use this feature to collect documents that you require even if they don’t need to be submitted with the application.

AdmissionsPlus Manager includes a specification to display the Grade Description instead of the Grade Level when adding a prospect to a parent account.

This specification is ideal for schools with non-standard grade levels. 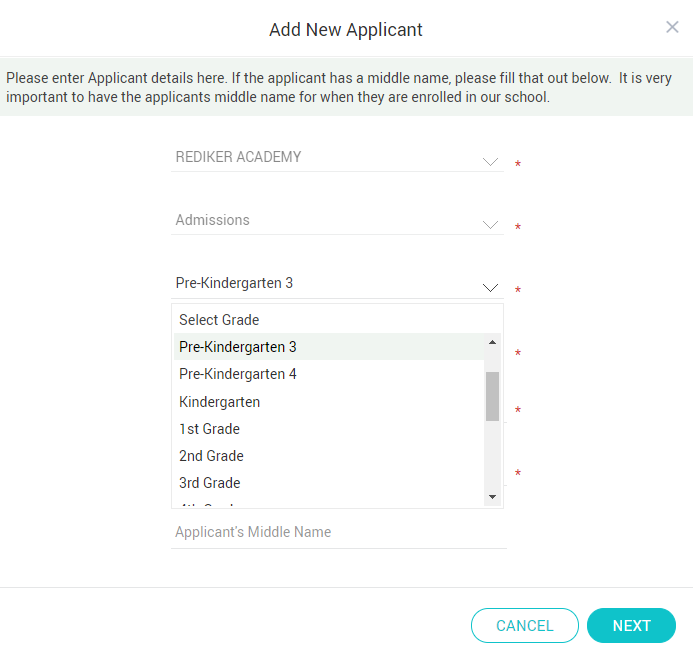 Add Save and Revisit Later to Visitation Forms

Visitation forms have a Save and Revisit button.

This helps schools using long or involved visitation forms.  Dates and times that a user selects are not saved until the form is submitted.

Visitation Day Specifications includes an Allow Multiple Visitors specification.  When this specification is selected, the form prompts users to enter the number of visitors who will be attending.  Each of these visitors is deducted from the total number of open slots. Using this feature, schools can better plan visits, such as tours, where each family could bring a variable number of visitors, but the school can only handle a set number.

You can add images to the email templates used in auto-reply scenarios.