This update includes an improved workflow that will make AdmissionsPlus even easier to use. Keep reading to learn more about this and other improvements and feature fixes.

Searches now use both the first and last name to find a Prospect. 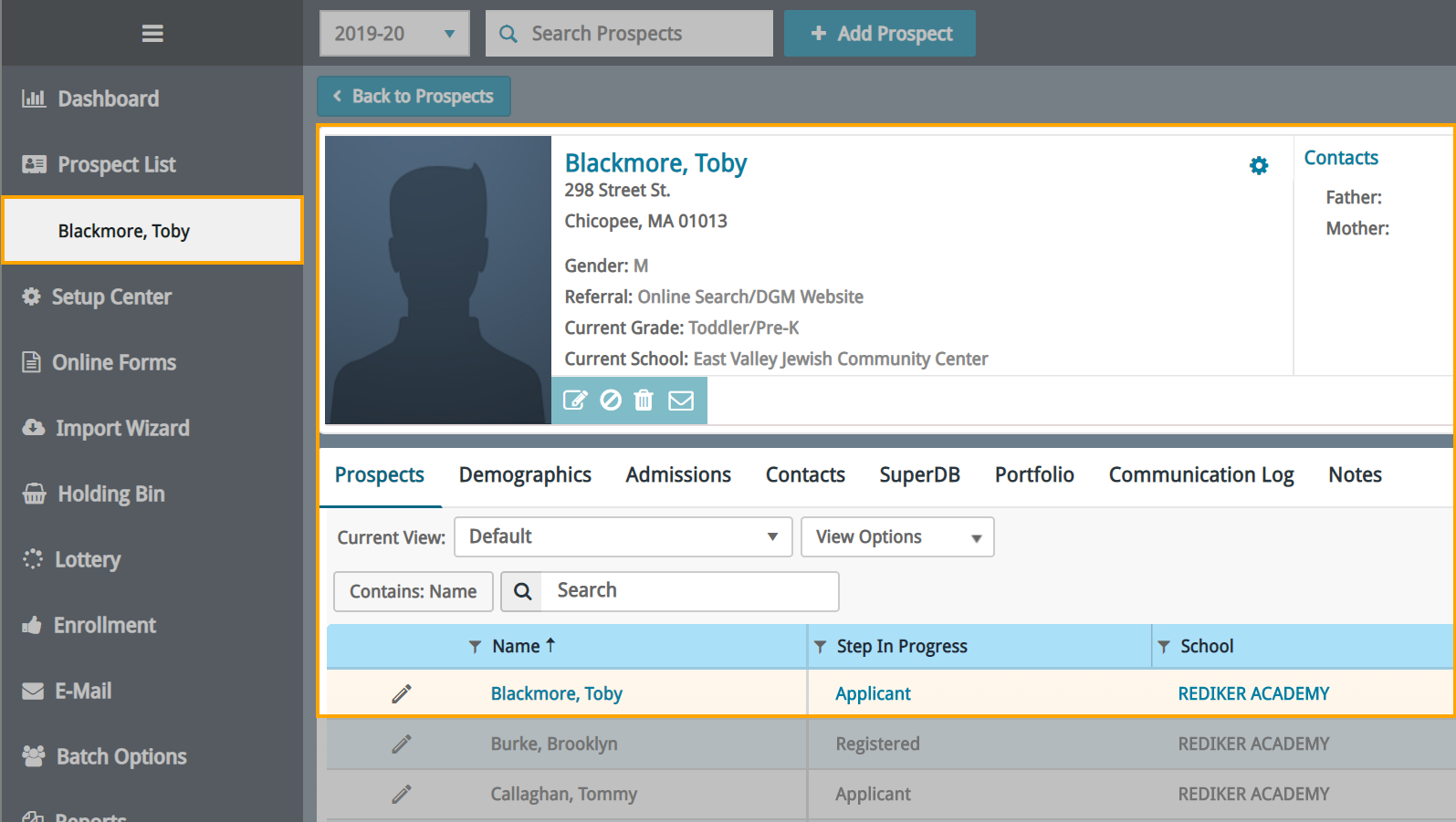 We added a Prospects tab to the Single Prospect page, which allows you to access the lookup without leaving the page. 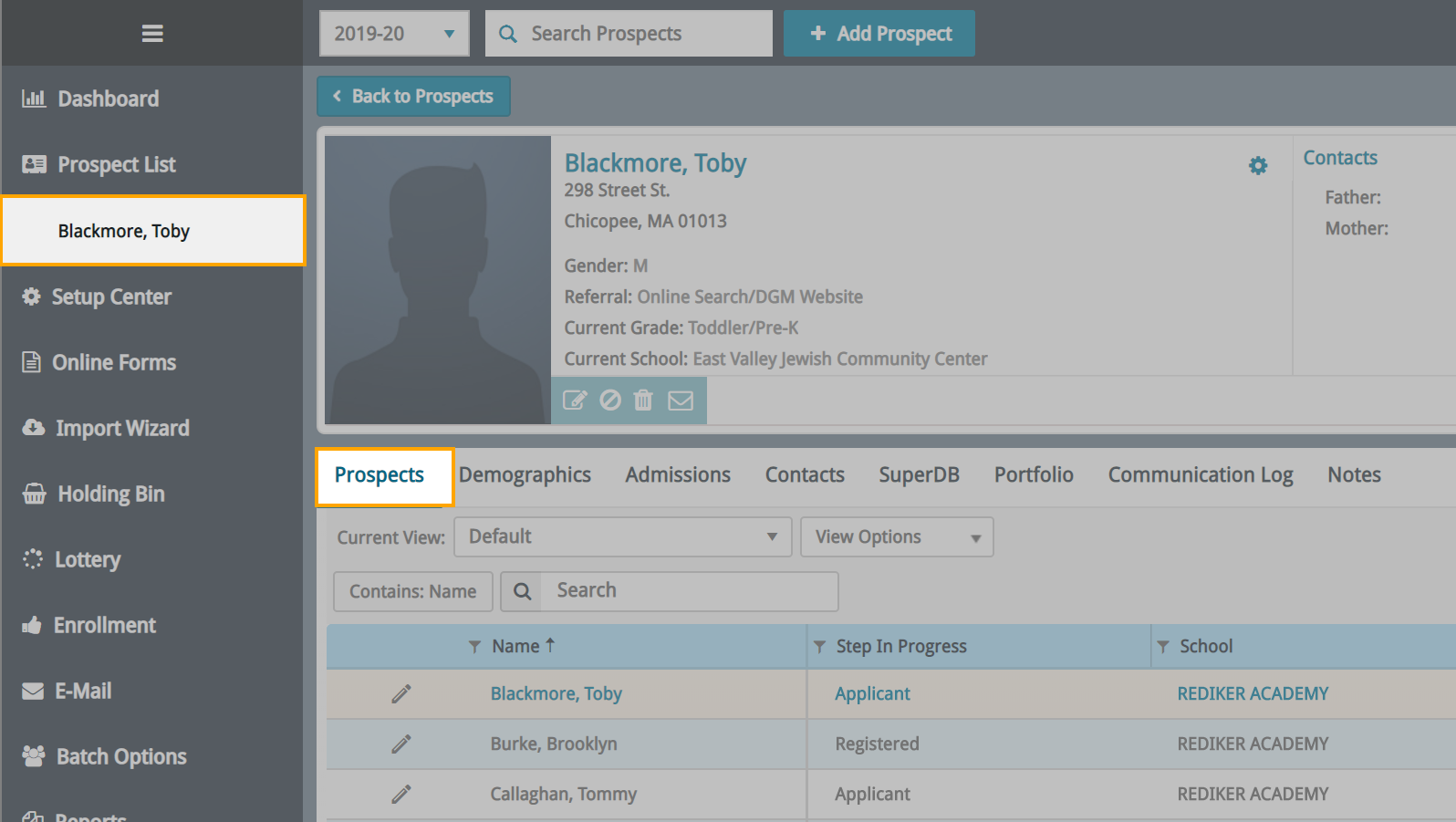 You can now display three statistical charts from the Dashboard when you log in to AdmissionsPlus. The first time you open the Prospect List after logging in, you can select from several Dashboard tiles to customize the data you see at login.

To view the same charts on the Prospect List after your initial login, click the Admissions Plus icon in the lower-left corner. 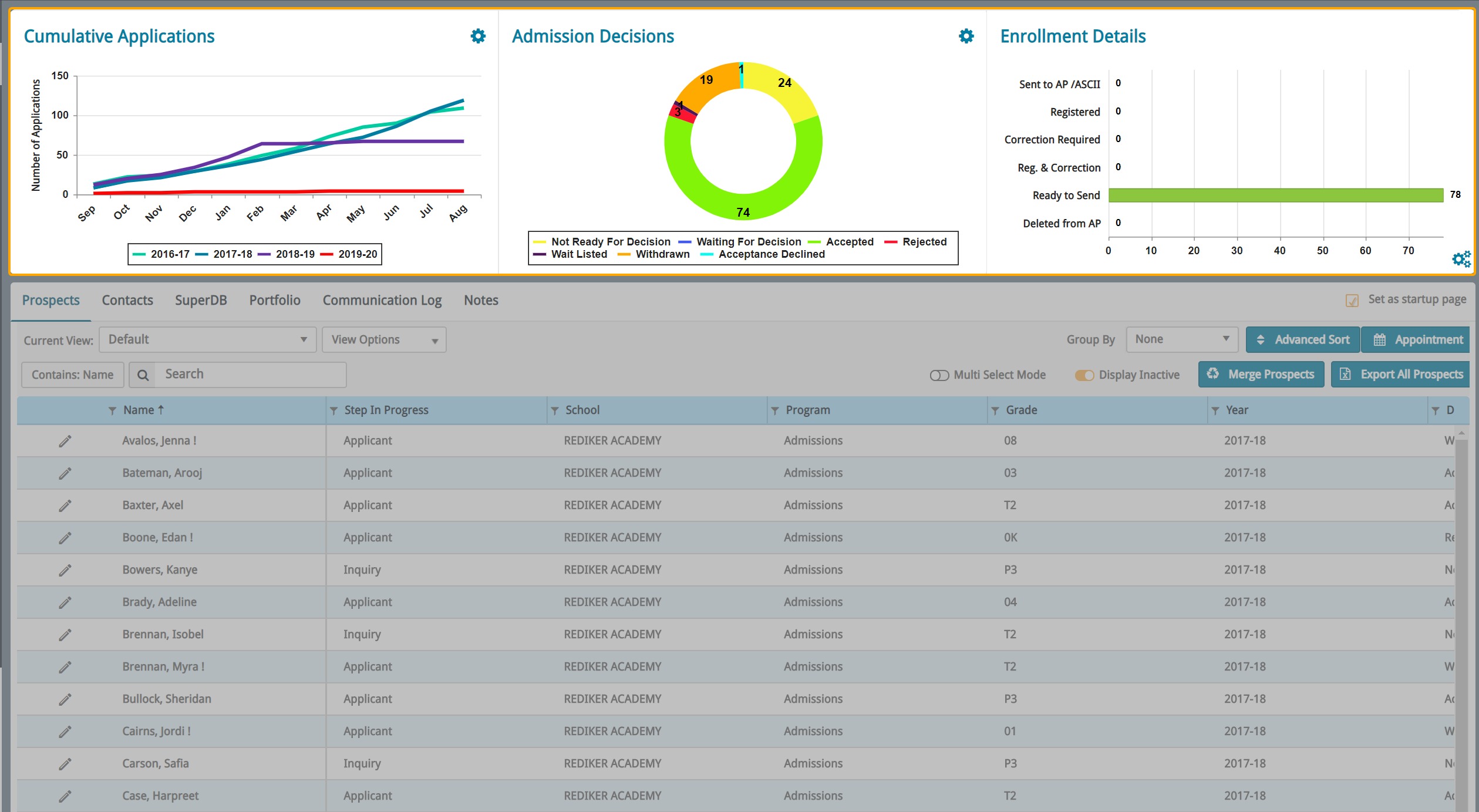 You can select from several pronoun combination codes (such as he/she/they, him/her/them, and his/her/their) in both upper and lower case. The value entered for Gender determines the pronoun inserted in the email. For example, if Gender is Male, he/him/or his is inserted; if Gender is Female, she/her/or her is inserted; and if Gender is neither Male nor Female, they/them/or their is inserted.

Use the Attending/Not Attending code with emails sent from a calendar event to determine who is attending the event. The recipient's decision to attend or not attend is reported to the prospect record attached to the event.

If your school publicly generates lottery numbers, you can click Display Prospect Name to hide or display prospects' names. Names are hidden when the option is off. 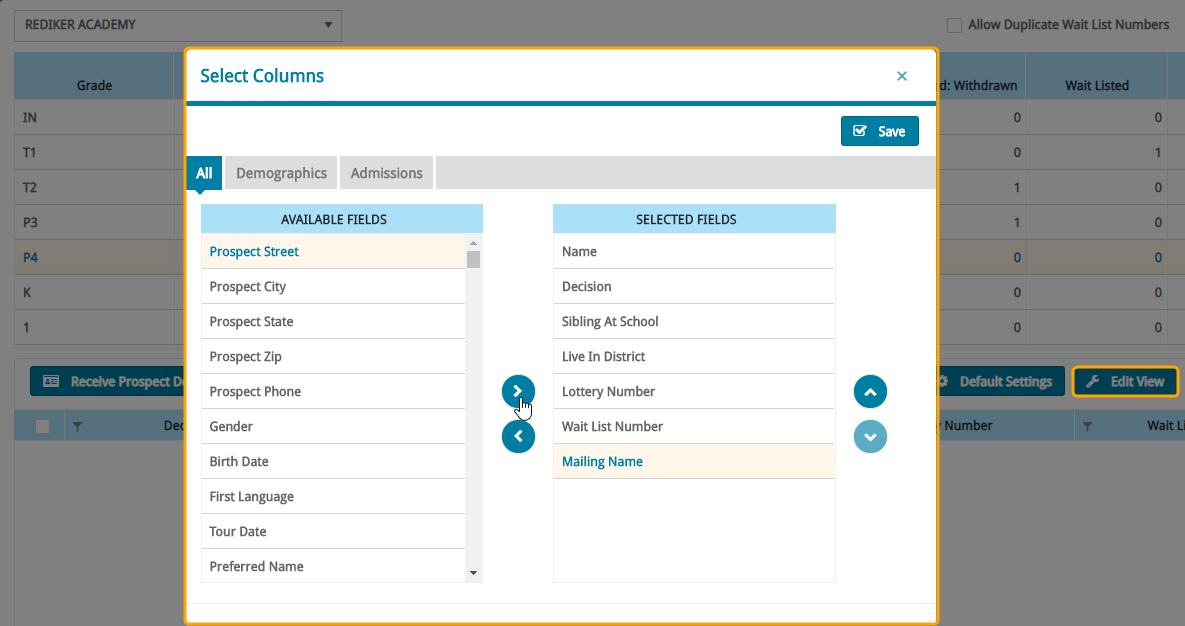 When you move your mouse over an editable field, the cursor changes to indicate the field can be edited when clicked.

The Lottery page loads faster and refreshes properly when data is updated.

The updates we've made to the Import Wizard make it easier for you to import prospect data. 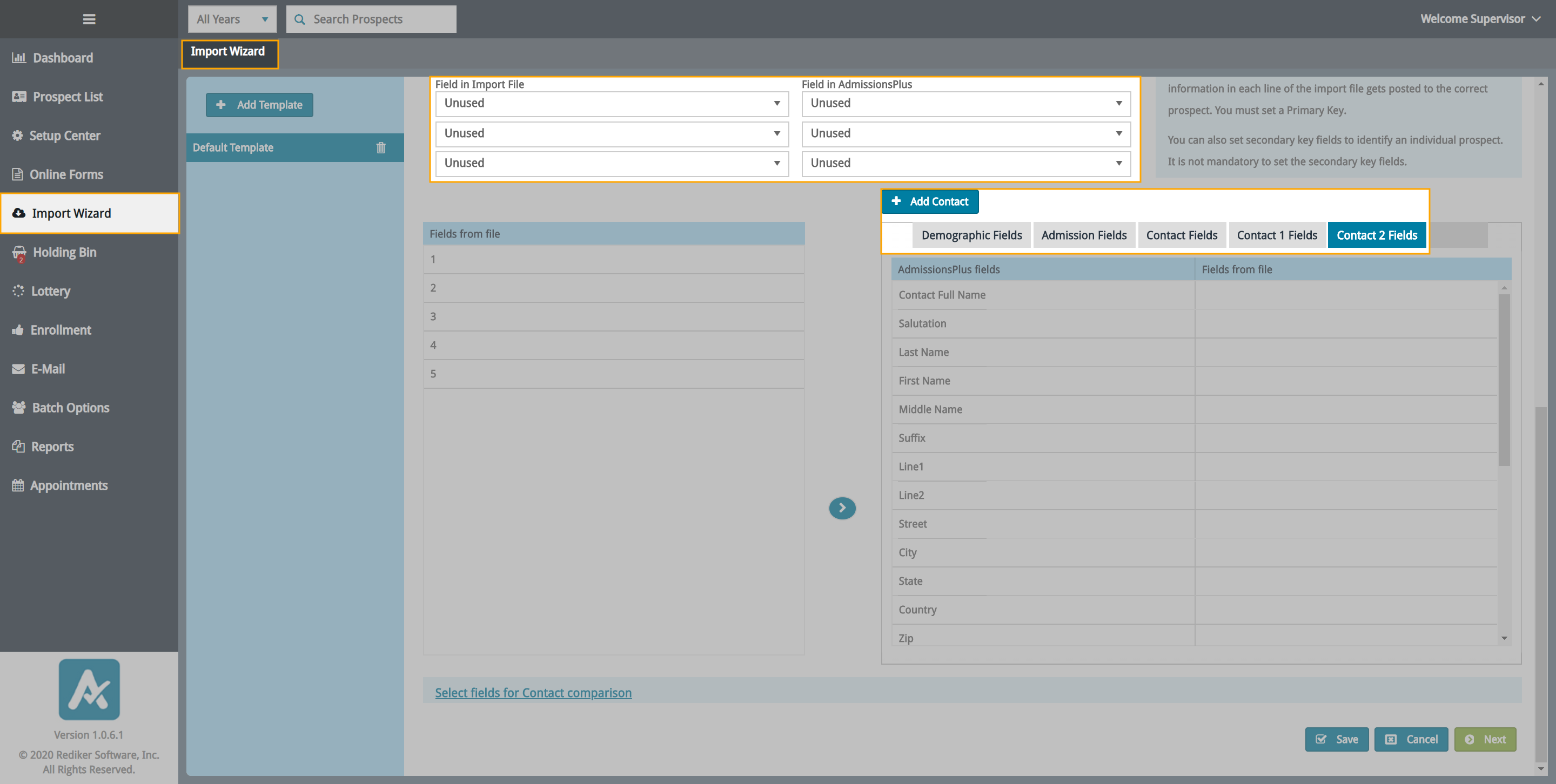 We renamed the Receive menu option to Import Wizard to better reflect the option's function.

The mapping interface has been reorganized so that incoming data from the import file appear on the left and fields being mapped to appear on the right.

Import Multiple Contacts At Once Feature

We added +Add Contact to the Import Fields interface so that you can map additional sets of contact fields and import multiple contacts at once.

Prospects are imported as a new prospect if either of the following is true:

If the prospect ID/prospect database field in the import field is not blank and is found in a record, and the Program, Year and Grade are the same, the prospect is updated.

If the prospect ID/prospect database field in the import field is not blank and is found in a record, and either the Program, Year, or Grade is not the same, a new program is added to the prospect.

The Login page has been redesigned to provide more information to the user, including links to the latest release notes and the AdmissionsPlus User Guide. 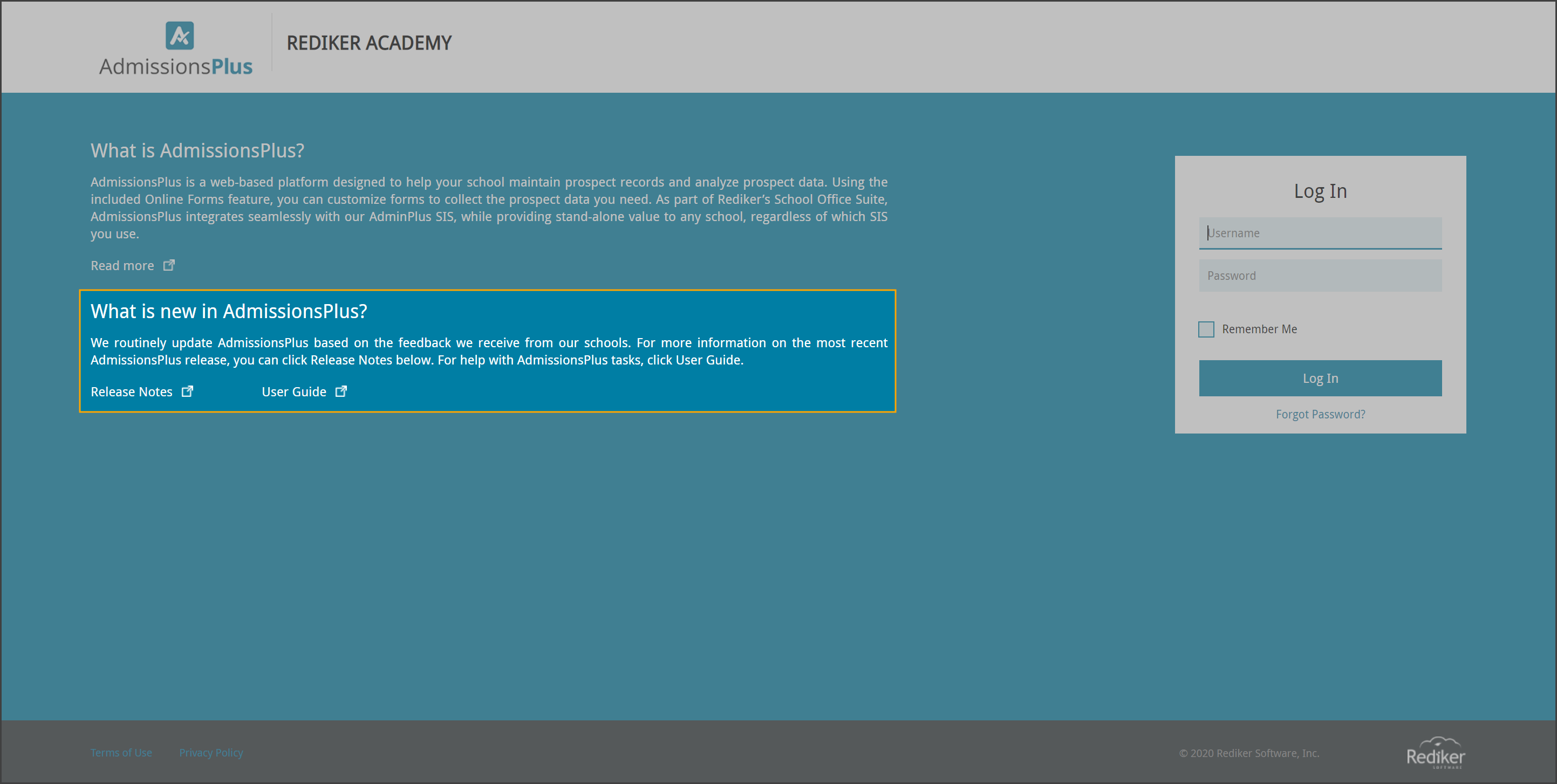 The prospect ID can be used as a unique Identifier when importing or when working with lottery results.

The prospect ID is only used in AdmissionsPlus.

We made improvements to the Batch Options page.

You can now batch enter “No Decision” to a list of prospects, which allows you to easily clear the decision from the list. 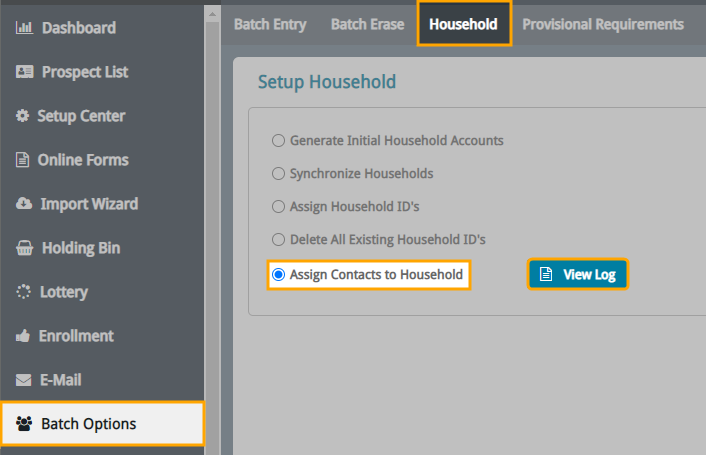 In the Holding Bin, you can click Change Form Status to change the status of forms, including forms that have been submitted.

The Link Grade Levels to Requirements headers no longer scroll with the data, making it easier for you to see which specifications you are setting. 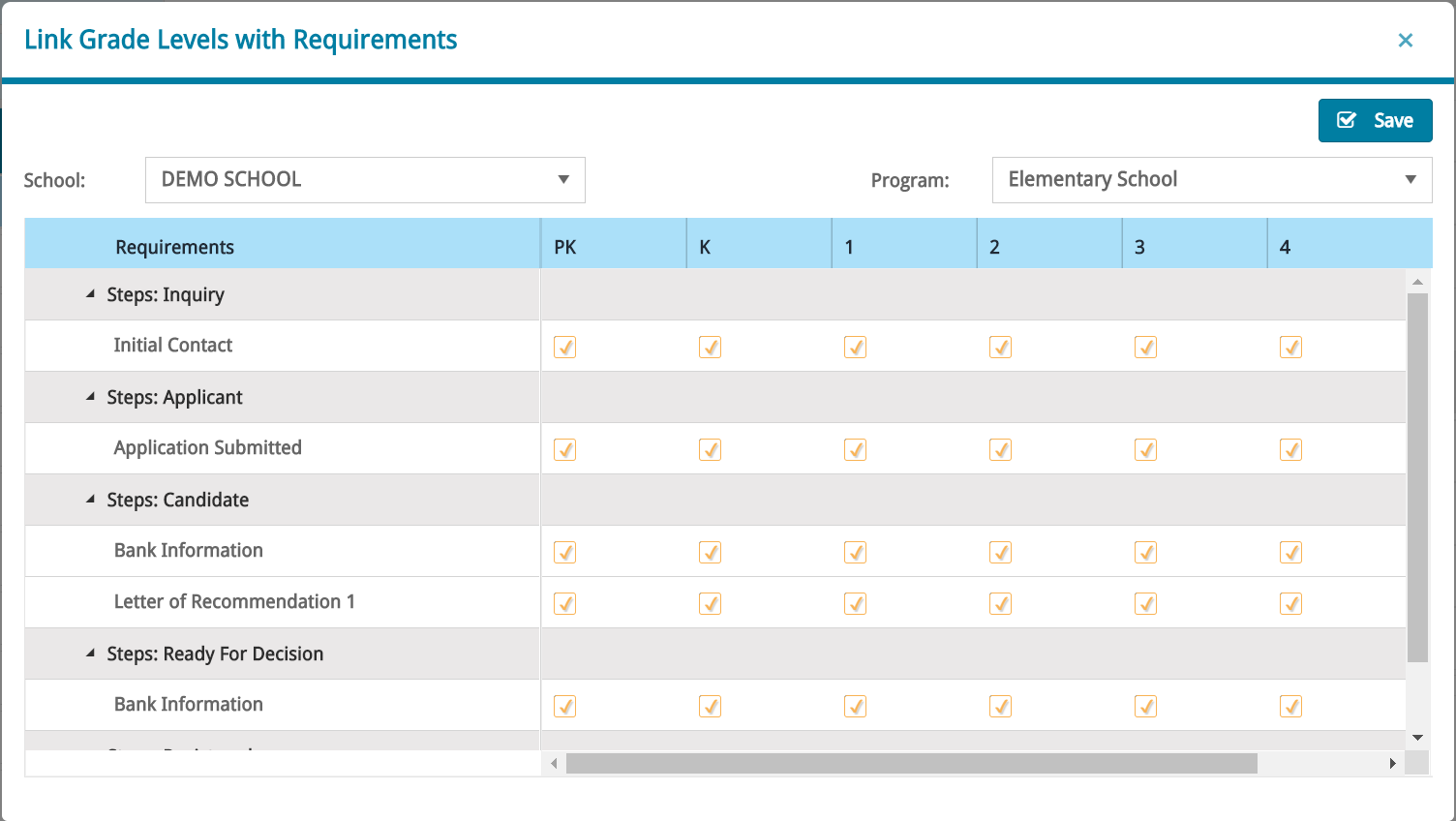 Form PDFs no longer display the formatting applied to an online form, allowing you to see any text formatting or tables.

You can drag and drop grade levels to change the order in which they appear in a program. 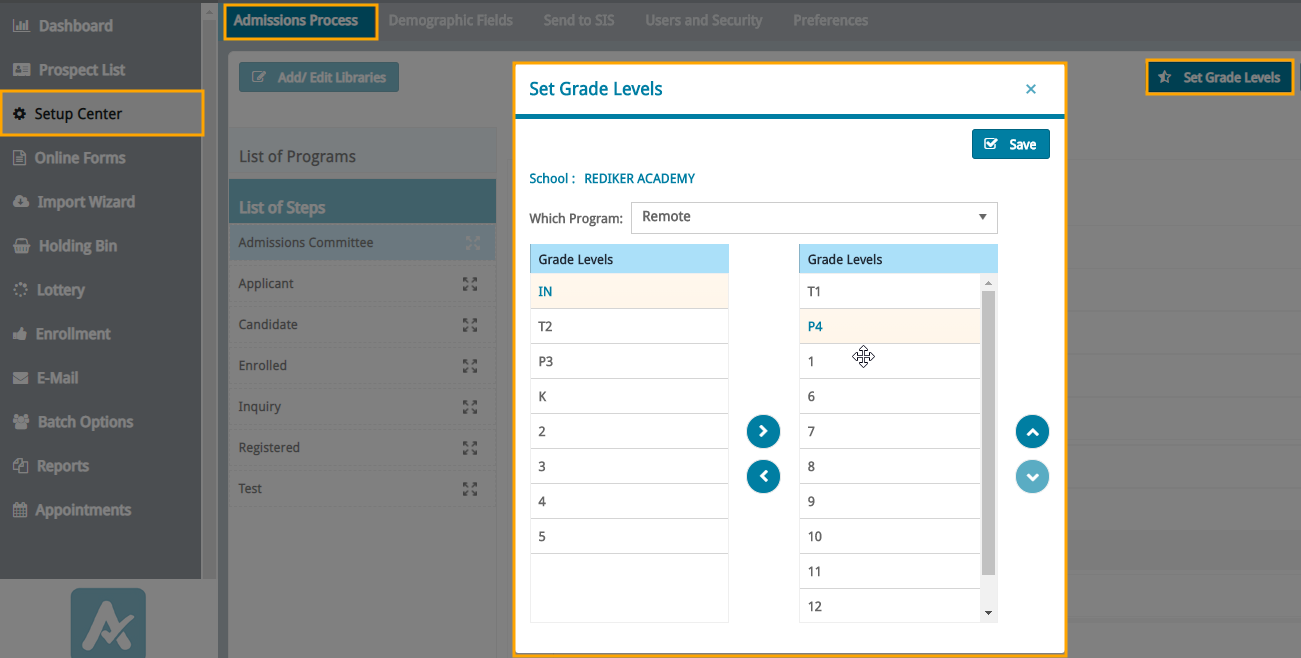 We updated the Mapping interface in Send to SIS to allow you to begin typing the name of the field you want to map in order to filter the list of available fields to match your entry. 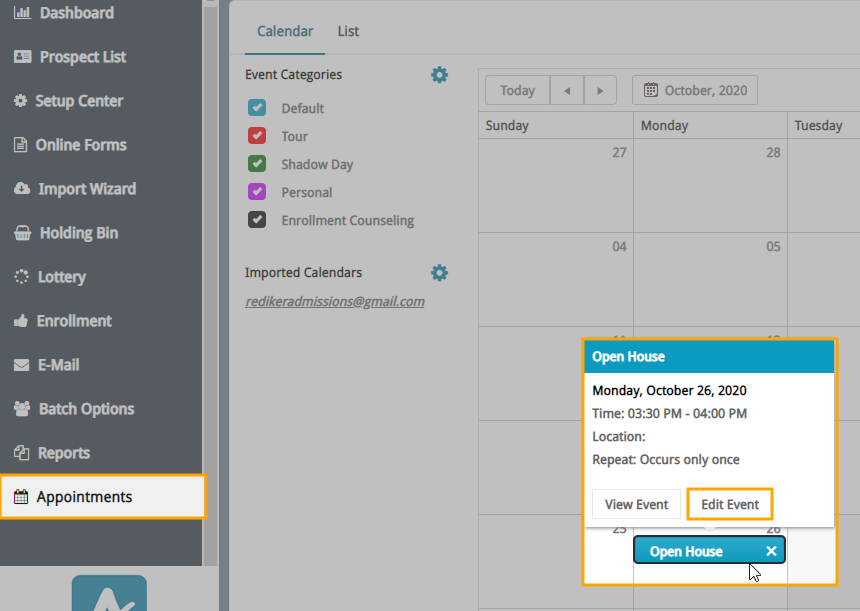 Students Are Activated Based on Assigned Decision

Inactive students were not activated when assigned a decision that should have activated them (for example, when moving a student from “Wait List” to “Accepted”). This issue has been fixed.

Fixed an issue where the decision status did not fully reset to “Waiting for Decision” when Reset was clicked.

Fixed an issue where only the first page of the Demographics view for a single prospect displayed a scroll bar.